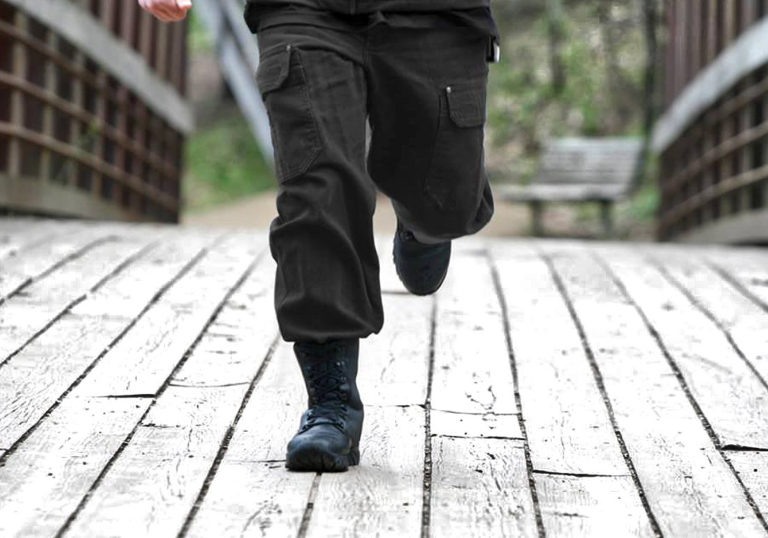 An essential goal in basic movement methods is the development of physical qualities in combination with psychological conditioning, utilization of acquired skills, and knowledge of action in operations.

Movement under combat conditions means remembering and applying the basic rule of appearing where and when the enemy doesn’t expect you. Urban survival and war tactics.

Any kind of operational movements demands:

Natural barriers such as streams, ditches, rock formations, hills and light forestation can be maneuvered without special methods.

To penetrate or bypass man-made obstacles and hardened positions, further training is needed.

In approaching an enemy, you need to be deliberate in silence, with slightly bent knees, stepping in a heel toe fashion. To move faster, you run the same way.

In military practice, soldiers use a uniformly long stride, swift running, or running alternated with walking and crawling to overcome various obstacles.

Running is done lightly, loosely, and without excessive straining. Soldiers leap during movement to get across holes, ditches, incidental objects, and to jump down into cover. The best method for concealed movement is the low crawl, with a target: the concealed approach to capture or kill an enemy.

The low crawl is done hugging the ground, using its irregularities, alternately moving the arms and legs, moving forward with the weapon in the right hand. In this, it is essential to keep the muzzle or blade point slightly ahead of oneself and above the ground’s surface, snow, water, or dirt.

Individual natural and man-made obstacles and positions can be overcome by crawling and clambering, utilizing various methods.

Night movement has its own special characteristics and differs from that at other times of day.

It comprises standing upright, crouching, going on all fours, and crawling. Moving quietly at night involves feeling out the ground with the toe before standing firmly. During such movement, the free hand (not holding a weapon) should be kept straight out in front, in the deliberate focus of observance in the dark, being cautious, feeling out the ground ahead, and not disturbing objects in the way. When running, steps should be short and light, feet lifted just a bit and the left hand should be held straight out in front.

When moving, it is absolutely necessary to keep your weapon upon your chest or in the right hand. Moving forward forward should be done with one side, usually the left, turned somewhat in the direction of forward projected movement. Crouching to stay concealed, lean the body forward slightly and knees bent.

Movement has to be silent, “in stealth”.

When nearing the enemy, move cautiously. Take small steps, placing the feet firmly and never being too relaxed, keeping your balance and often.

Pauses and halts are needed to “listen” to and observe the enemy, because during movement your situational hearing is compromised, and the enemy can pick up the sounds of someone approaching.

When necessary, match the enemy’s footstep patterns to yours and mind your breathing and gear sound levels beyond the ones made from your feet.